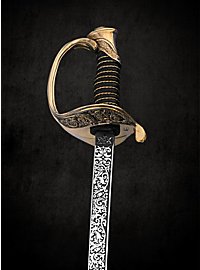 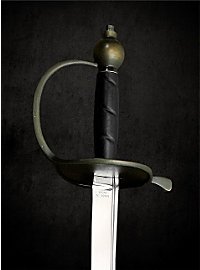 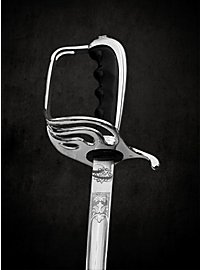 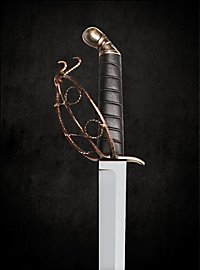 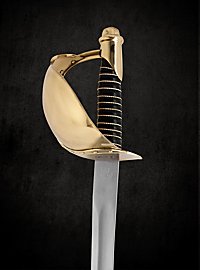 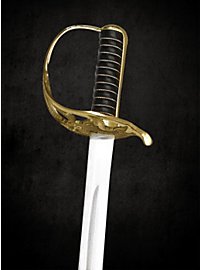 Here you have landed in the sabre store of Supreme Replicas! From pirate sabers, exotic kukri, to western cavalry sabers you can buy your sabre here! Sabres are one-sided sharpened blade weapons which are more or less strongly curved. They were spread by the influence of different steppe tribes from the 7th - 8th century in the Middle East and later in other parts of the world. A sword with a curved blade, such as a sabre or scimitar, has a much greater cutting effect than a sword or epee with a straight blade due to its blade shape. This is one of the reasons why sabres became more and more popular in Europe, which also had a lot to do with the fact that armour became less and less common and therefore curved blades more effective. One could recognize an officer's rank in the military by a sabre. And even today sabres fulfill a status-giving service in the military.

Buying a sabre at Supreme Replicas offers many advantages. We have an extremely wide selection of classic pirate sabres, exotic sabres like a Persian shamshir or the Khyber knife from the Hindu Kush, but also some US military officer sabres of the 18th century. We offer many common payment methods and also purchase on account. The delivery is fast and on request even by express. Our support is available Mo - until Fr 9:00 - 17:00 clock also for telephone orders and questions about the products.

Our sabers come, like all our swords and epees, with the matching scabbard. Please note, however, that they are only sold to persons over 18 years of age. Also in the household a sabre should be secured in such a way that persons under 18 cannot reach it. For the transport it is valid that blank weapons, like a sabre, must not be transported ready to hand. At medieval festivals or outdoor training, written permission should be obtained in advance from the office or the event operator.

Care instructions for our sabers.

A sabre always comes well greased and should be removed from its foil after receipt and cleaned with for example WD-40 or Ballistol, so that some basic grease remains on the blade, which prevents it from rusting. The carbon steel of the blade can rust, but with good care it will eventually form its own patina. If the blade becomes too dry or is touched too often, it should be cleaned and re-greased to prevent rust. Rust should be sanded down and polished away and then the blade should be re-greased. In general it is better to store the weapon outside the sheath. Regular polishing also helps to prevent rust.

Information and measures on the current situation

Current delivery time
Currently, we can meet our delivery time of 1-2 business days. We will keep you informed if our shipping partners make adjustments.

Hygiene measures in our warehouse
Our employees who are not able to work in the home office are careful to observe all hygiene measures. These include regular hand washing, disinfection of surfaces and keeping a distance from colleagues.

Customer service
Our customer service is also available as usual. If you have any questions about your delivery, please email us at service@supremereplicas.com or call us on 030 - 40044670 (Mon-Fri from 9:00-17:00).

We use cookies to provide this website. By continuing to surf the site you declare your consent. Details